Disasters have always co-existed with human civilization & its progress. Over the last few decades its propensity has been increasingly noticed, & unfortunately India too experienced natural disasters of gigantic proportions causing huge misery in terms of large scale death & destruction. The loss in terms of private, community & public assets have been astronomical BJS identified the area of disaster response management as one of its key area of operation and have undertaken many relief & rehabilitation operations successfully. BJS has successfully leveraged the core strength of the organization evolved over the yearsin successfully executing large relief, rehabilitation projects and coming up with sustainable, meaningful solutions and time bound delivery during catastrophic national disasters. 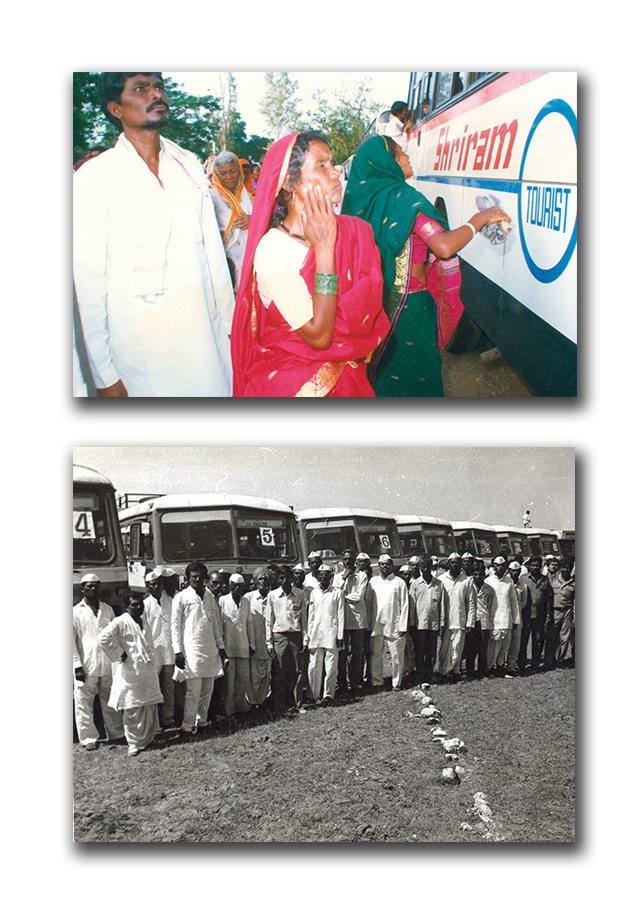 30,000 victims provided food twice a day for 15 days Main relief camp set up within first few hours of earthquake. 800 volunteers reached the disaster site within a few hours of the tragedy. 200 utensil kits, 50000 sweaters, 10000 blankets, 4000 saris distributed with bed-sheets, clothes, mats, stoves, candles, containers etc. 1200 disaster affected children from 29 villages identified for educational rehabilitation, necessary permission obtained for starting Primary, Middle Schools and a Junior College In Oct 93, identified children shifted to Pimpri – arrangement for 1200 children made in 120 rooms of Atmaram complex, Pimpri School set up in Pimpri started on Oct 26 and classes started within two days. As a permanent solution Education & Rehabilitation Centre set up on 10 acres land at Wagholi with a large 280000 sqft educational complex with the assistance of World Bank and State Govt, with a state-of-the art building and all facilities like hostel, labs, library, classrooms etc., and capacity to accommodate 1000 students WERC inaugurated on 29 Nov 1998 and all the children shifted there, with free education up to graduation, lodging, boarding, medical facilities, holistic development opportunities as well as disaster management training facility. 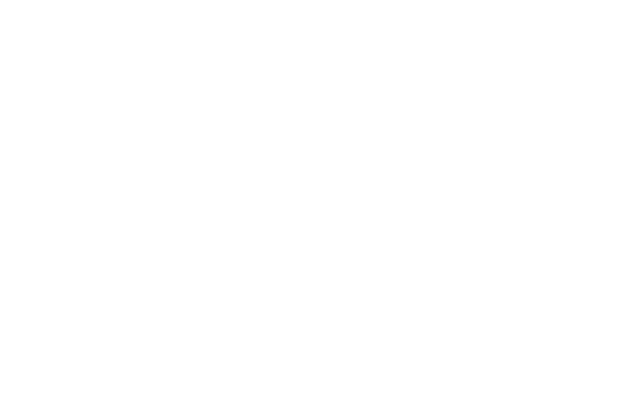 Earthquake struck Jabalpur on 22 May, 1997 resulting in loss of 29 human lives and extensive damages Apart from rescue and relief operations carried out by BJS volunteers, 44 students in 5th to 10thstandards were identified and selected and brought over to Pune and then to WERC 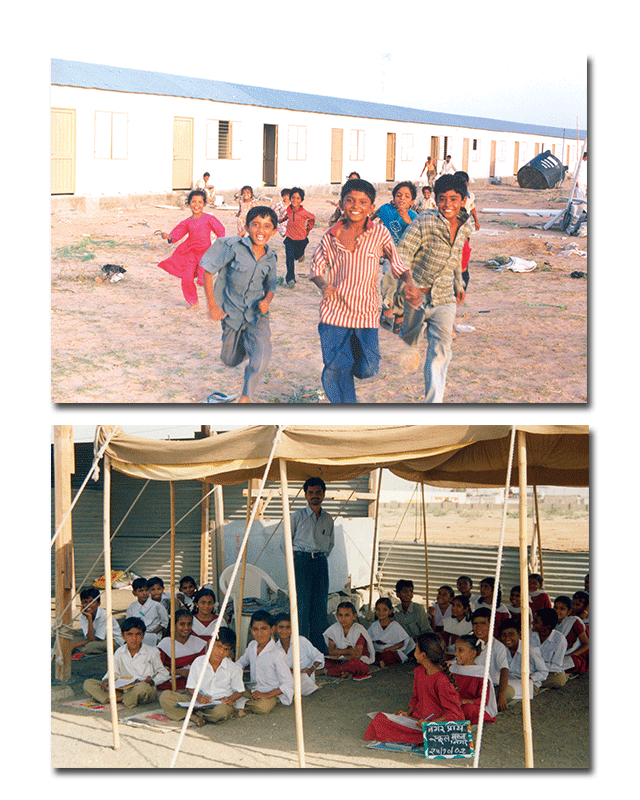 Relief centres set up at various places - major centres at Bhachau and Samkhiyali Arrangements for cooked food, clothes and medicines for 30,000 people daily Besides rescue & relief operations, standout initiative was constructing schools on a war footing First school came up at Samkhiyali out of the ruins after just 12 days with 500 students back in class on the 13th day of disaster. Construction was made in a way that it lasts for minimum 20 years with pre-frabricated material 469 villages in Kuchchh and Rajkot, Jamnagar and Surendranagar districts were surveyed and 275 villages identified to start school reconstruction work Plans and designs drawn up for cyclone and earthquake proof construction as suggested by World Bank team by engaging a team of experts. Fund raising campaign conducted within the Jain community, Media and Political Parties generating huge response. Team of 44 experts including civil engineers, masons, carpenters, electricians and other skilled personnel mobilized and sent along with construction personnel from Pune, Mumbai and Jalgaon In a record time of 90 days, BJS constructed 368 schools and handed over to Gujarat govt on 3rd June, 2001. The entire project was governed by BJS where the national and international donors’ funds were routed for this purpose wherever applicable.

Objective was to reconstruct fully damaged schools in Andaman & Nicobar islands, equip the schools and provide support for improvement in quality education additionally taking care of reconstructing health care facilities. Steps followed were - A. Conducting in-depth survey and preparation of action plan B. Receiving all necessary permissions after detailed presentations of the proposal C. Establishment of infrastructure and co-ordination centre at Port Blair D. Appointment of qualified architects for preparation of drawings in conformity with IS 1983 standard for seismic zones. E. Signing of MOU with A&N administration for reconstruction of schools, health centres and sub-centres. F. Identifying and engaging qualified contractors with the right credentials. G. Completing construction and handing over of 11 schools, 30 primary health centres and 4 primary health sub-centres to administration within a year. H. The entire project was governed by BJS where the national and international donors’ funds were routed for this purpose wherever applicable. I. For quality improvement of schools, 402 school were covered with an MoU with A&N and BJS to roll out BJS EDUQIP programs. 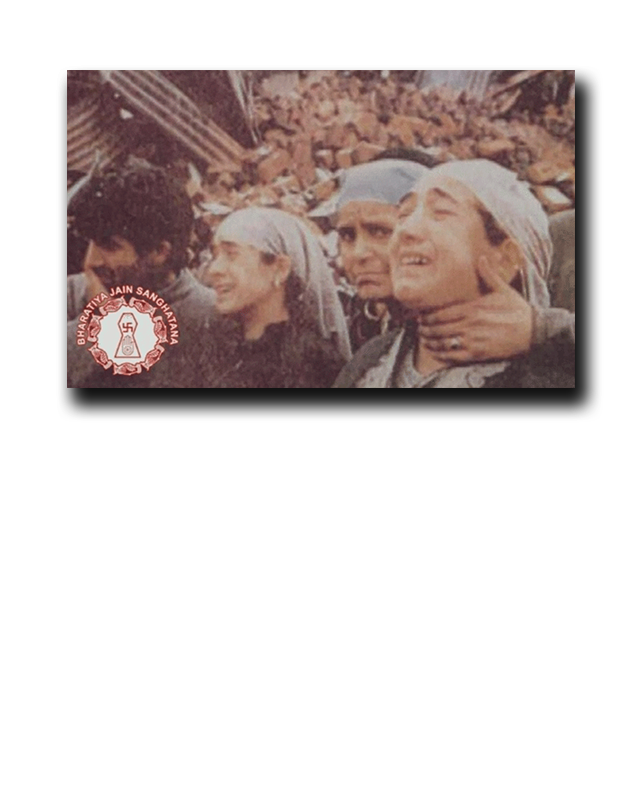 Singular achievement of BJS was in setting up shelters post- earth quake by recycling buildings constructed in Gujarat in 2001. This was done on the request by newly-constituted NDMA in acknowledgement of BJS work and speed for constructing shelters on war footing – by signing the first ever MoU by NDMA. It was a massive relocation exercise involving feasibility studies, convincing and associating all stake- holders viz J&K administration, NDMA, getting all clearances and permissions, logistics management 870 shelters got constructed in Tangdhar, Teetwal and Dringla regions admeasuring 3,34,000sqft area and sheltering 15000 people within a time span of 50 days. Educational rehabilitation of 500 disaster affected / orphaned boys of J&K at WERC Pune, for six months, was also the highpoint of the rehabilitation initiative. 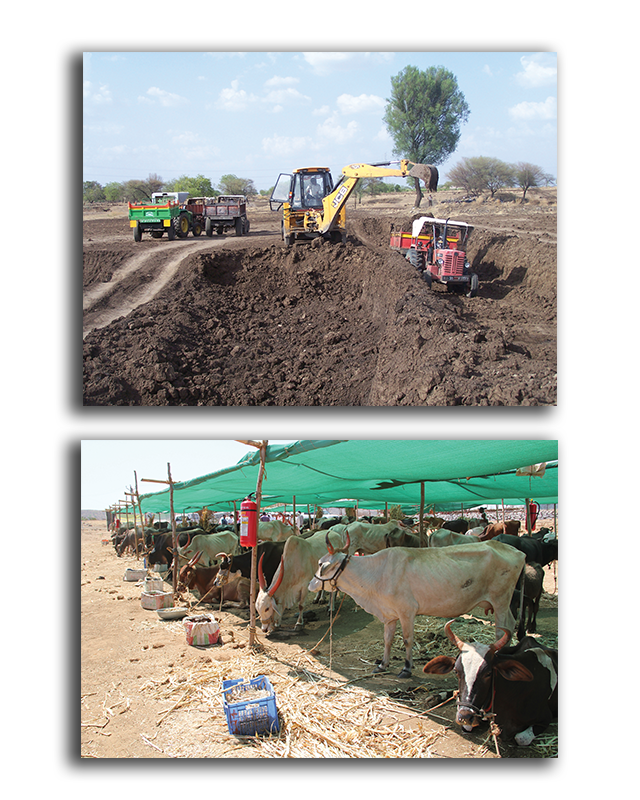 Beed district of Maharashtra was one of the districts that suffered from acute draught in the year 2013. BJS took the unique initiative of de-silting 115 village water bodies (ponds, tanks) within 1 month. More than 90 JCBs / Poclains were mobilized and 2000 to 2500 truckloads of silt was removed every day. A total of 2000000 cu mtr of silt got removed, and carried away by villagers to be deposited and spread over agricultural lands, which enhanced the fertility and raised agricultural output. The water storage capacity of these water reservoirs got enhanced by 20 lakh litres. Besides the above, BJS has successfully carried out relief, rescue and rehabilitation operations in many other incidents of natural calamities: 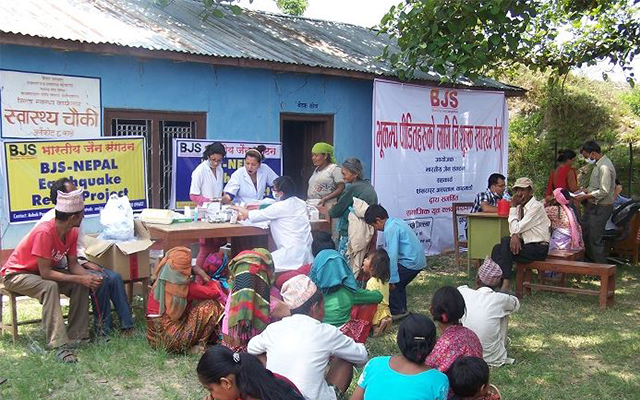 The earthquake of 7.8 magnitude on 25th April 2015, followed by a slew of after shocks and eventually followed by yet another quake of magnitude 7.3 on 12th May 2015 in Nepal have thrown the country off balance. Both quakes struck at a depth of 15 km. Destruction to life and property has been tremendous with over 8000 dead and over 5.6 million affected in 39 districts while 2.8 million internally displaced.

Going by the reports up to 90 per cent of the health facilities in Ramechapp, Nuwakot, Sindhupalchowk and Gorkha have been severely damaged. As per the 19th May report released by the Ministry of Health and Population (MoHP) a total of 1100 health facilities have been either fully or partially damaged.(Source: WHO Situation Report#17, 19 development. th May 2015)

The India- Nepal relations have been very cordial and the Indian Prime Minister Shri Narendra Modiji has instructed the government of India and requested the people of India to reach out to Nepal in these troubled times in every possible manner. BJS looks upon this as an opportunity to further strengthen the ties between both countries. 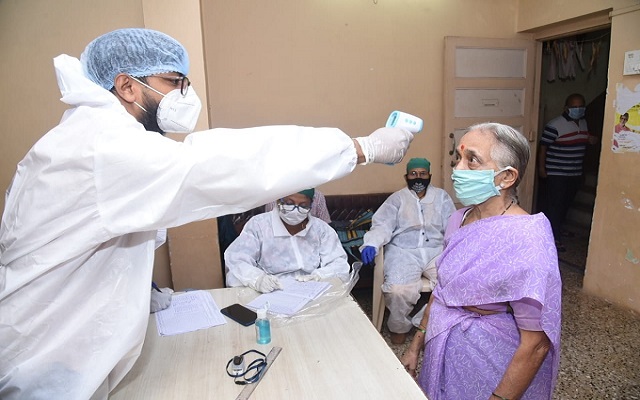 2020 saw the world grappling with a new health emergency – the COVID-19 Pandemic. In India, as the number of cases started increasing, BJS swung into action from 1st April 2020, soon after the nationwide lockdown was declared. BJS mobilized it’s karyakartas and joined hands with its partners to support the administration with a mission to prevent further spread and provide prompt support to citizens. Our Wagholi Educational Rehabilitation Centre (WERC) in Pune was turned into a 1000 bed ‘quarantine centre’ and was handed over to the District Collector in March 2020 itself. 11,700 blood bags were collected through several blood donation camps across various districts in Maharashtra over a course of 3 months and were handed over to blood banks to tackle this crisis.

In the first three months, our Mobile Dispensary SEVA provided health support to more than 16 lakh citizens across 49 cities during the lockdown. The focus was on the early detection and assessment of patients to reduce the transmission rate. Along with Pune, Mumbai, and Thane, the program was implemented in 20 districts in Maharashtra, as well as in Tamil Nadu, Karnataka, Gujarat, etc.

Amongst others, BJS also contributed significantly to augment Municipal Corporation of Greater Mumbai’s (MCGM) efforts in Dharavi in Mumbai, Asia’s largest slum spread over 613 hectares with a population of over 6.5 lakhs, which had turned into a COVID-19 hotspot, making it a critical agenda for the administration. BJS deployed 11 mobile dispensaries, conducted health check-ups of more than 21,000 citizens, distributed medicines, and helped identify COVID-19 suspects. MCGM’s dedicated efforts along with BJS’s support led to a complete turnaround in Dharavi, and the COVID-19 mitigation efforts were even recognized by the World Health Organization (WHO). The same was the case with Malegaon in Nashik district which had turned into a hotspot, and the joint intervention by Malegaon Municipal Corporation and BJS was instrumental in managing the crisis. Learnings from the initial relief efforts by BJS led to the genesis of “Mission Zero”, which is a Rapid Action Plan for mitigating the COVID-19 crisis in other cities and hotspots. 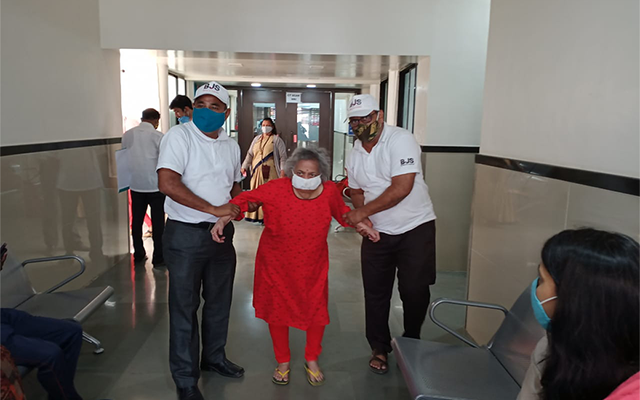 Bharatiya Jain Sanghatana and the Municipal Corporations of Mumbai, Thane, Navi Mumbai, Pune and Pimpri-Chinchwad have joined hands to make the COVID-19 vaccination program a successful Jan Andolan through people’s participation. This unique initiative is supported by the Bill & Melinda Gates Foundation, Desh Apnayen, CREDAI-MCHI and StepOne in Mumbai, Thane and Navi Mumbai; and by Force Motors and StepOne in Pune and Pimpri-Chinchwad. The initiative will soon be scaled to other cities of Maharashtra as well. Important activities of Mission Lasikaran include: